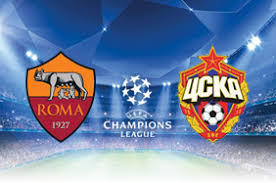 We are taking our attention to Group G of the Champions League, where Roma faces CSKA Moscow in a match at the legendary Stadio Olimpico in the Italian capital.

Last season was very successful for Roma. The club didn’t win any trophies, but the Wolves reached the 1/2-finals of the Champions League, which was an excellent performance for them. The manager Eusebio Di Francesco and his players showed that they can beat even teams like Barcelona, eliminating the Catalans from the 1/4-finals of the competition.

Now Roma would like to do something similar to what they did last season. The Italians didn’t start very well, conceding a heavy defeat in their first game against Real Madrid. But in their second game they showed their true strenght, crushing Viktoria Pilzen with 5-0 at home. The game was a true spectacle and the big hero of the day was the Bosnian international Edin Dzeko, who scored a hattrick.

Now Roma are aware that they still need some more points in order to progress to the 1/8-finals once again. And now, facing the leader in the group CSKA, they don’t have any other choice – they have to win.

Like we said, CSKA are the leader in this group, which is kind of surprising, of course. The Russian team started its campaign with a draw in Pilzen against Viktoria, but after this won against Real Madrid in Moscow. It was shocking for many people, but the truth is that CSKA played a very good game and showed to everyone that they can beat teams like Real.

Now CSKA will have another tough task against Roma, especially away from home. We believe that the Italian team is the favourite here, but CSKA’s match against Real Madrid showed us that we shall not underrestimate them.