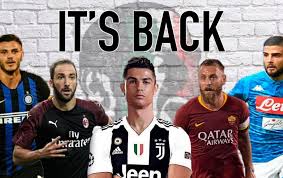 Frosinone hosts the champion Juventus in a match from the 5th round of the Italian Serie A. Let’s take a look.

Frosinone are among the newcomers in the Calcio this season, but they didn’t have really a bright start of the campaign. Right now Frosinone are 19th in the league standings, having just one point won so far. This is because of their draw against Bologna. In the other three matches Frosinone suffered defeats against Atalanta, Lazio and Sampdoria.

You just have to take a look at Frosinone’s goal difference at the moment. It’s 0-10, which is telling us how many problems this team is having right now. Alongside Bologna, Frosinone are the only team without a goal scored in the Serie A at this moment.

And now for them it’s going to be very difficult against Juventus. The champion is leading the standings with 12 points and a perfect record of 4 wins from 4 games played. Juve are the number one contender for the title and this is not surprising anyone. We are all used to the fact that the Old Lady is dominating the Serie A and most probably this won’t be changed anytime soon.

The last game was special for Juventus, because the superstar Cristiano Ronaldo scored for a first time with the Bianconeri shirt. He even did it twice. Juve hosted Sassuolo at home and won with 2-1, thanks to two strikes from Ronaldo. He was worried because he was unable to score in the first three matches, but now he’s starting to show his imennse class.

During the week Juventus had a game in the Champions League as well. Cristiano was sent off against Valencia, but Juve still managed to win with 2-0.

This is our look at the Serie A game between Frosinone and Juventus.