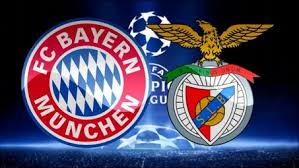 Bayern Munich hosts Benfica in a game from Group E of the UEFA Champions League. Let’s take a look at this clash at the Allianz Arena in Munich.

Bayern are currently leading the standings in the group with 10 points, having 2 points advantage in front of the 2nd Ajax. That’s why the Bavarians need to win this one in order to keep their position as a leader in the group. So far they have 3 wins and 1 draw in 4 games played in the group.

In their last match Bayern achieved a 2-0 win over AEK Athens at the Allianz Arena. Both goals in the game were scored by the team’s leading goalscorer Robert Lewandowski.

Right now Bayern have some serious problems in the Bundesliga. They are trailing seriously behind the leader Borussia Dortmund and they are making a lot of mistakes. This also happened on Saturday, when Bayern made a very dissapointing 3-3 draw at home against Fortuna Dusseldorf. Clearly there’s some kind of a crisis in the club at the moment.

Benfica on the other hand are 3rd in the group with 4 points, trailing on 4 points behind the 2nd Ajax. The Portuguese team missed its big chance in the previous round, when they faced Ajax at home. This match ended with a 1-1 draw, which was dissapoiting for Benfica, because they needed to win in order to keep their chances for the 2nd place. Now for them it’s much more realistic to secure the 3rd place in the group and continue in Europa League. This was just not their year in the Champions League, we can say.

That’s what we had to say about the Champions League clash between Bayern Munich and Benfica at the Allianz Arena. We wish you good luck!