Ajax welcomes Bayern Munich in a direct clash for the first place in Group E of the Champions League. Let’s see what’s going on with these two teams before their battle at the Johan Cruijff Arena in Amsterdam.

At this moment Bayern Munich are leading the group with 13 points, having 2 points advantage in front of Ajax. This means that Ajax’s only chance to win the group is to beat Bayern on Wednesday night. If the game ends with a draw, Bayern will keep the first place.

For Bayern this is a very dissapointing season in the Bundesliga so far, but in the Champions League the Bavarians are doing pretty well. In five games played so far, they have won four of them. Bayern’s only mistake came against Ajax in Munich, when the game ended with a 1-1 draw.

This is a very tough season for FC Hollywood so far. The new coach Niko Kovac is getting a lot of criticism for the way Bayern performs. Right now it looks like they need 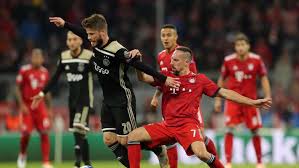 some serious changes in the summer, if they want to become the number one team in Germany once again. Most of the people think that this could be Kovac’ first and last season as Bayern manager, unless he doesn’t find a way to improve the team.

For Ajax the most important thing is that the Dutch team already qualified for the 1/8-finals. Now they have a chance to win the group as well. So far Ajax are doing very well in the competition, being unbeaten in the five games played. The team have a record of three wins and two draws.

That’s our thoughts about the clash between Ajax and Bayern Munich in Group E of the Champions League. We wish you good luck!